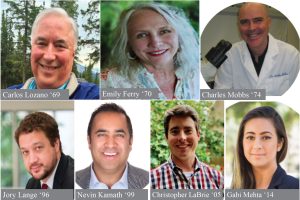 Where do our graduates go after they leave Keystone? Literally to the highest levels of accomplishments in many fields.

This year’s Alumni Day brought graduates who have gone on to make significant contributions in medicine, law, business, aerospace, and the movie industry.

They shared their experiences of Keystone, how this school prepared them for success in college and beyond, how they chose their careers and they offered advice about life after high school.

Carlos Lozano ‘69 – Dr. Lozano graduated from Keystone School in 1969 and attended Austin college 1970-1973 with a BA in Biology. He attended the University of Texas Medical school in San Antonio and received his MD degree in 1973. After a 3 year residency in Family Medicine at UT Health San Antonio, he began a medical practice in downtown San Antonio. Dr. Lozano and his wife are happy to have been blessed with 4 children who were well served by their Kinder through Graduation education at Keystone!

Emily Ferry ‘70 – Emily is a Property Master in the film and television industry. The Property Master is in charge of everything that the actors touch, and certain things that move. This can include ham sandwiches, eyeglasses, vehicle license plates, cell phones, backpacks, weapons, coffee cups: pretty much anything you can think of.

Emily was the first female Property Master in history of the I.A.T.S.E. – the union representing behind the scenes workers in the entertainment industry. She has been the Property Master on such films as How the Grinch Stole Christmas, Memoirs of a Geisha, Matilda, Alien Resurrection, Gattaca, On Golden Pond, and Man in the Moon, and recently completed seven seasons on the Netflix television show, Grace and Frankie.

Charles Mobbs ‘74 – Graduated from Keystone in 1974 (!) as a National Merit Scholar, graduated from MIT with a BS in Biology, and graduated from University of Southern California with a PhD in Molecular and Cellular biology. Carried out post-doctoral studies at Rockefeller University, where he was promoted to Assistant Professor, then moved to the Mount Sinai School of Medicine to facilitate clinical studies, where he is now a Professor of Neuroscience, Geriatrics, Endocrinology, and Therapeutic Drug Discovery (http://labs.neuroscience.mssm.edu/project/mobbs-lab/). His basic research has focused on how dietary restriction delays essentially all age-related diseases in all species examined. Having largely elucidated that mechanism, he has now turned to discovering drugs that mimic those protective effects, focusing mainly on Alzheimer’s Disease. This drug discovery program has been remarkably successful and has led to founding of the biotech company Gilga-Med (https://gilga-med.com) to move these drugs into clinical use for a wide variety of age-related diseases including Alzheimer’s, Huntington’s, Parkinson’s, stroke, traumatic brain injury, and, surprisingly, COVID-19.

Jory Lange ‘96 – When corporations sell food contaminated with E. coli, Salmonella, Listeria, Vibrio, Campylobacter, or Cyclospora pathogens, Jory Lange helps the families who have been harmed. Jory also helps people who have been affected by water contaminated with Legionella and Legionnaires’ Disease. One of the nation’s leading food safety lawyers, Jory has helped families from California to Florida, from the Midwest to the Mid-Atlantic, and in states across the nation. Jory Lange became a food poisoning lawyer to help make our communities and families safer.

When large corporations violate important safety rules, Jory helps the families who have been harmed. After 18 years as a products liability lawyer with a nationwide practice, Jory has wide-ranging experience helping families who have been injured by dangerous and defective products. Before founding his own law firm, Jory was a partner at a high profile national plaintiffs’ law firm, where he served as the firm’s lead trial lawyer for mesothelioma cases and founded the firm’s food safety practice. Jory went on to establish his own law firm so that he could devote his law practice entirely to helping families who have been affected by E. coli, Salmonella, Listeria, Vibrio, Campylobacter, Cyclospora, or Legionnaires’ Disease.

Other lawyers and law firms have often hired Jory to take their most important and difficult cases to trial. Jory is licensed in Texas and multiple federal courts. Courts across the country have also admitted Jory pro hac vice (meaning “for this particular occasion”) to handle important cases in their states.

Nevin Kamath ‘99 – Raised by two immigrant entrepreneurs, Nevin Kamath (Keystone 1999) has been passionate about improving organizational health since he discovered the business guru Peter Drucker’s writings while in high school.

Today, Nevin helps client organizations through his consulting agency, Kamath Coaching and Consulting. In his free time Nevin is a part-time student in Fielding Graduate University’s Master of Arts in Organization Development and Leadership and intends to enroll in a part-time PhD in Organizational Behavior in Fall 2023. Nevin is a former National Merit Scholar and graduated from the Business Honors Program at The University of Texas at Austin (2004) and Harvard Law School (2009). Nevin began his career as a management consultant with the global consulting firm McKinsey & Company.

Christopher LaBrie ‘05 – Dr. Chris LaBrie is a Keystone grad from the class of 2005. He is a practicing veterinarian in San Antonio and is the owner of Kothmann Pet Hospital. He was born and raised in San Antonio, Texas and attended Keystone School from 2nd through 12th grade.

He attended Texas A&M University for his undergraduate studies and obtained a major in Chemistry and a Minor in Biology. Upon completing his undergraduate work he was accepted into Ross University School of Veterinary Medicine in St. Kitts and Nevis. After completing veterinary school in the Spring of 2013 he returned to San Antonio to practice veterinary medicine. His father Mark LaBrie and his younger brother Nick LaBrie (Keystone grad class of 2009) are also veterinarians practicing in the San Antonio area. They own and work at Alamo Dog and Cat Hospital. Dr. LaBrie and his wife Whitney have a 6 month old son Edward and two dogs, Hank and Layla.

Gabi Mehta ‘14 – Gabi graduated from Keystone School in 2014 and went on to attend Pomona College to receive her BS in Physics and Astrophysics in 2018. During her time at Pomona, Gabi worked heavily in the field of astronomy primarily through internships. One notable internship was a joint research program through Caltech University and the Indian University of Astronomy and Astrophysics (IUCAA) studying Super Fast X-Ray Transients (SFXTs) using simultaneously collected data from India’s first space telescope, I-Sat, and a remote observatory in Chile. She also spent a significant amount of time working on social climate change within the physics and astrophysics community both at Pomona and across the consortium of the Claremont Colleges

Since 2018, Gabi has been working at The Aerospace Corporation as an electro-optical sensor analyst. There she is working as a technical consultant for the Air Force providing an unbiased third-party opinion on defense and commercial aerospace missions.