How our fourth-graders interact with National Geographic Explorers 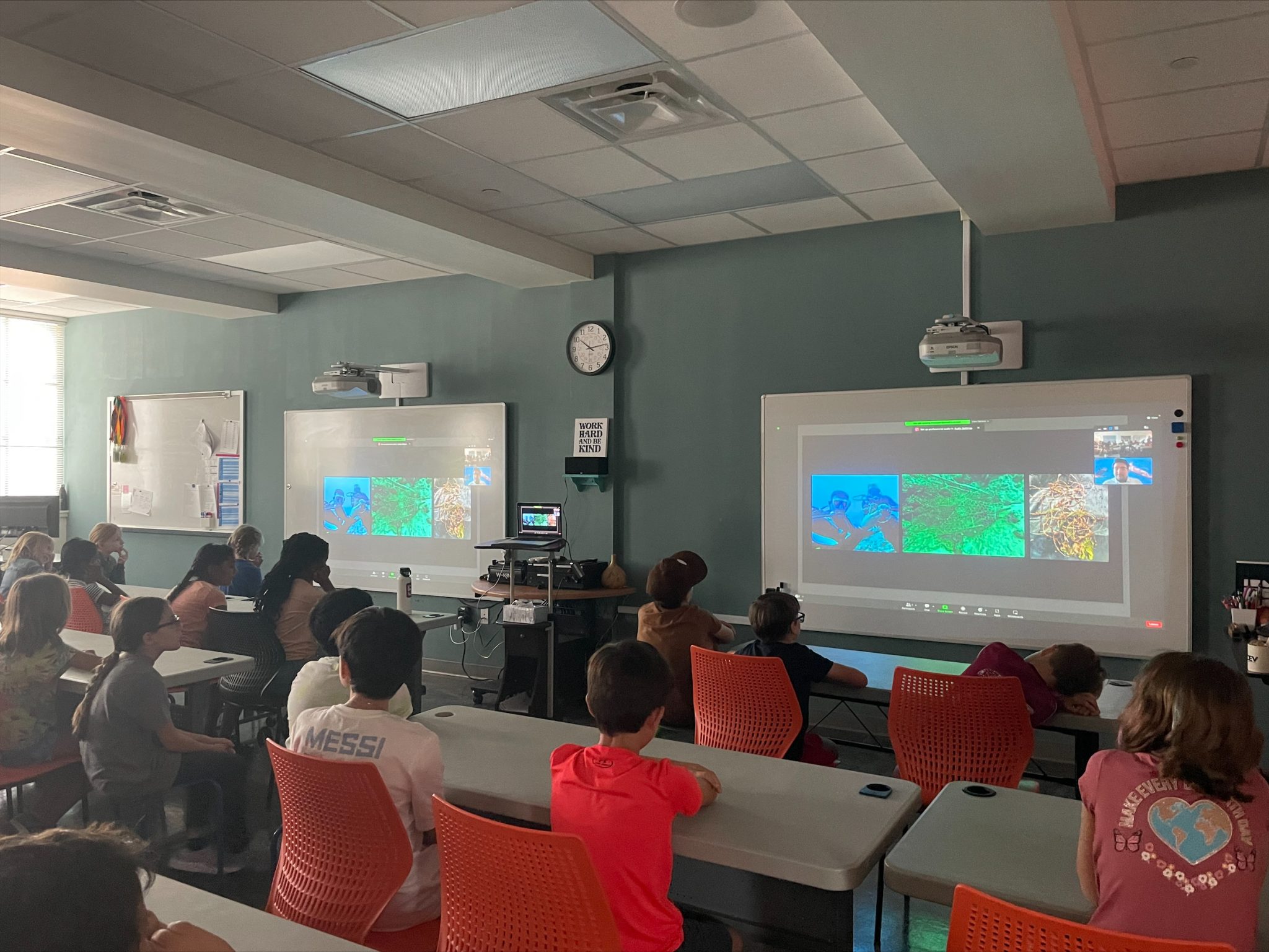 How our fourth-graders interact with National Geographic Explorers

Last week, I was able to join the fourth graders as they connected online with students and teachers from other schools and educators from National Geographic in underwater exploration.

The program, called Explorer Classroom, provides “a live interactive session that connects young people with National Geographic Explorers to hear behind-the-scenes stories and interact with cutting-edge scientists, researchers, and powerful storytellers from around the globe.” I’m grateful that fourth-grade teachers Ms. Holden and Ms. Holliday invited me to join their classes for this activity. In the instance I observed, explorers were diving 100 feet below the surface of the Pacific Ocean near Hawaii to study a coral-encrusted WWII U.S Hellcat fighter plane.

In the process, the students would learn about Remote Operated Vehicles (ROV) as the cameras displayed live footage from the depths of the ocean, and the status of the wreck. According to Ms. Holden, “previous excursions for 4th Grade Cobras have included four live zoom sessions with the E/C Nautilus—learning about the ship, sharks, and the sunken ships off the coast of Maui.”

Students also hear how scientists have used these sunken ships or planes to create artificial reefs for fish and other creatures of the sea. The team from National Geographic leaves the wreckage in place, and a food chain develops around the sunken vessel. At a time when coral reefs are dying around the world, this process allows new habitats to develop.

Young people also have the opportunity to ask questions directly to the explorers about their work. For example, Keystone student Vihan asked “Have any of your Rovers or devices broken or gotten stuck while exploring the wrecks?” Other students asked about the ROV, or underwater exploration in general.

To say that this was awe-inspiring would be an understatement. As opposed to reading about the scientists’ endeavors, young people around the world engage in conversations with scientists in real time as they perform their research. It was as if John Muir carried a Go-Pro camera in 1885 during his hikes through Yellowstone or Gertrude Bell broadcast her journeys through Saudi Arabia and Yemen in the 1890’s.

I asked Ms. Holden about the Explorer Classroom program, and she explained. “I was invited to join this expedition by a fellow Grosvenor Teacher Fellow Explorer who was on the E/V Nautilus as part of a program she was working with. Kelly Kohler and I worked together with the Ecology Project International last April in Yellowstone. Turns out another Nat Geo Teacher Fellow and friend, Daniel Kinzer, was on the same ship (we both served as National Geographic Teacher Community Leaders, and they both encouraged me to bring my kiddos.)”

Through these experiences, students learn a number of valuable lessons. They see how scientists and explorers do their work and advance knowledge. They can view firsthand the effects of the ocean on seemingly impregnable vehicles like ships or airplanes. For example, the underwater currents can move wrecks from place to place, or they can either corrode or preserve vehicles depending on a number of factors. Students can witness in real time the wonders of the ocean and see a variety of creatures, including sharks.

When asked by a student from another school what was his favorite discovery so far, one of the National Geographic Explorer pointed to the exploration of a sunken 1860 ship that was illegally transporting enslaved people off the coast of Mobile, Alabama. He also shared the excitement of finding a shipwreck off the coast of Turkey from the 17th Century filled with clay jars and products for trading between Egypt and other locations in the Mediterranean.

Perhaps another important lesson for the students was seeing technology advance fields like archaeology. We know how modern tech can help in STEM-related disciplines; here was an example of the ways that advances in science can further research in the humanities.

Lastly, maybe experiences like Geographic Explorer can compel our students to dream big and pursue their own adventures. Some Keystone alumni currently do underwater research in their chosen field while others work on archaeological digs in far off places. Classes like the other day can further the desires of today’s Cobras’ to follow in their predecessors’ footsteps of exploration and discover what’s out there. That’s truly exciting!