How we nurture creativity in our students 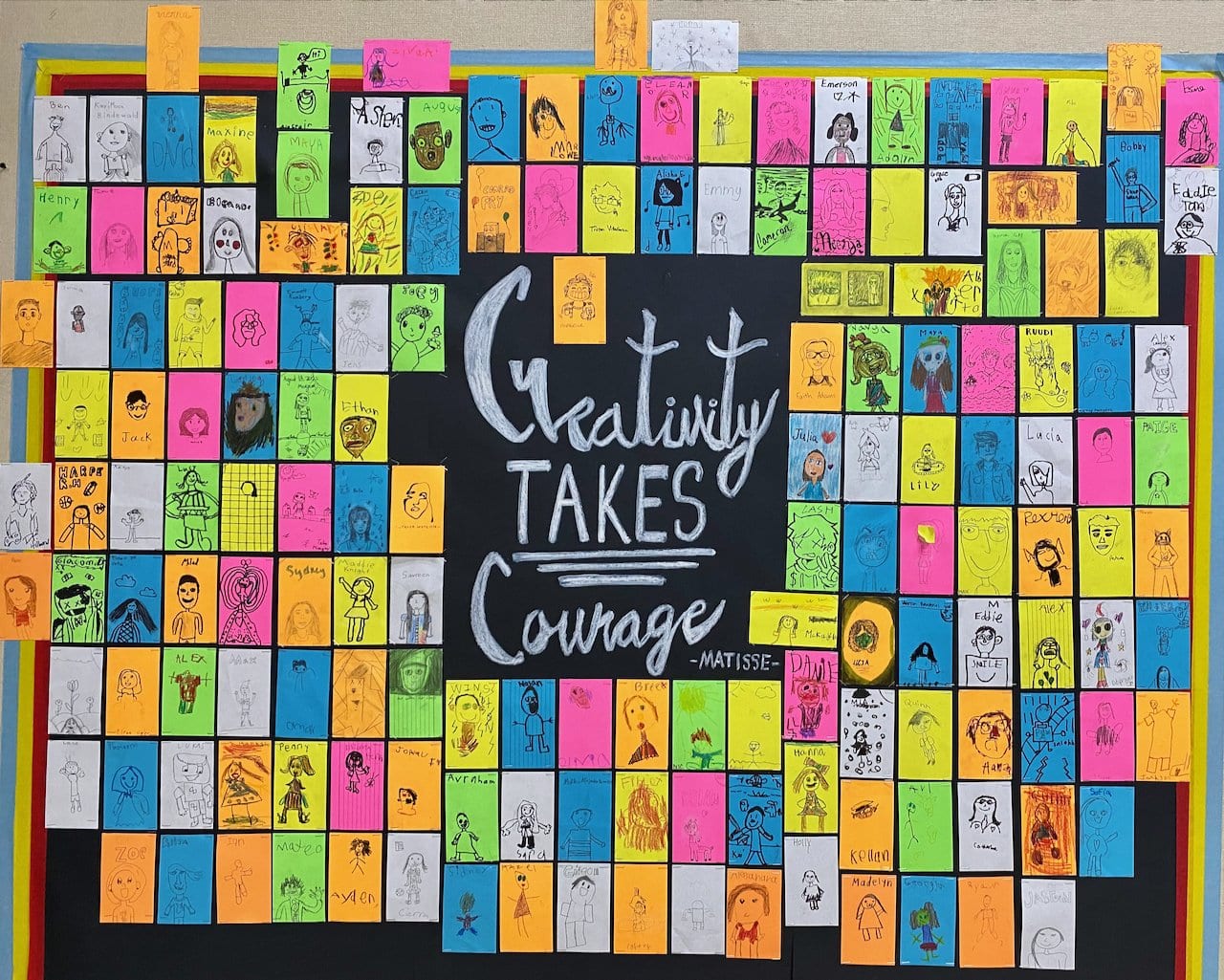 How we nurture creativity in our students

This maxim by the famous French painter stands at the center of a wonderful art piece by Keystone students in the cafeteria just outside my office. Consequently, I have the good fortune to view it often, and I smile every time I see it. The students’ self-portraits surrounding the aphorism attest to the bravery of our Cobras as they share their artistic visions of themselves. Just the other day, a group of students who were studying the montage asked me which picture was my favorite; of course, I told them that I liked them all. Thank you to Dr. Hilburn for teaching the students about art and determination through this project.

While some may see this artwork as cute or endearing, it’s much more than that. The combination of children and adolescents’ renditions of their own faces with Matisse’s quotation speaks volumes about Keystone’s approach to learning.
An online dictionary defines create as to “bring something into existence.” For this to occur, students must be willing to take risks. They should understand, though, that they may fail, or something may go awry. Not every effort will result in success, and they will experience disappointment again and again.

However, ultimately they will succeed. As they encounter false starts, we adults can explain to them that as a colleague once expressed, “a failure is an event, not a person.” We should still prepare ourselves, though, for them to roll their eyes, give an exasperated sigh, and tell us “you just don’t understand.”

As counterintuitive as it may seem, the need for courage to create may be even more pronounced among the kind of students who attend Keystone. For children who have been successful in their young lives, taking chances on something new or different can be frightening. They may ask themselves, “why should I extend myself when I’m doing pretty well right now.”

Many years ago, our oldest son won the first chess tournament he entered when he was 6. After he received his trophy, he announced that he was quitting the king’s game. Incredulously, I asked him why, and he replied, “I can only go downhill from here.” Our efforts to encourage him to play went nowhere until he rediscovered the game in high school; even then, though, he merely dabbled rather than competing.

The vulnerability that creativity requires can seem daunting or overwhelming for some children. Very often, this may be why some students avoid certain topics or activities. As the grown ups in their lives, we should help our children move forward by first acknowledging that creating something new can be both exciting and frightening.

We can teach them that bravery is not the absence of fear. On the contrary, courage requires recognition that something is scary. We should help our children name the fear, develop the skills for overcoming it, and then encourage them as they set out to conquer whatever obstacle intimidates them. In this way, they can experience the self-satisfaction of achievement.

When our now 22-year old son was 14, he and I went canoeing and hiking in Southern Utah. At one point as we scaled an escarpment, his fear of heights kicked in, and he froze, unable to move forward. Trying to be supportive, I told him that he didn’t have to climb further and we could turn around if he wished. With teeth gritted in a combination of fear and anger, he growled “It’s not that I don’t want to do it, it’s that I don’t know how.” I explained to him what to do next, and eventually, he made it to the top of that cliff face, where he beamed with pride.

So often, this is what our children encounter. They may want to try new things or venture into different territory. They desire to be brave; they just don’t know how and they’re afraid of letting themselves or others down. As a result, it’s just easier not to do it.

Perhaps this is why another crucial component for children to transcend their vulnerability is providing them with a supportive environment. Again and again at Keystone, teachers and coaches encourage children to “try it,” and “give it your best.” They tell children that the word “fail” can also stand for “first attempt in learning.”

Last Friday night, those of us in attendance at the inaugural Stone Soul of the 2022-2023 school year witnessed what occurs when adults and students develop an environment where taking chances is recognized and rewarded. Sponsored by the Upper School Literary Magazine, Stone Soul allows students to share their talents with schoolmates and faculty chaperones. Whether they are performing classical pieces on piano or violin, playing rock music in a band or duo, or singing a song solo, Cobras demonstrate extraordinary acts of fortitude. Maybe part of the reason they feel safe doing so is the cheers and warm applause of their peers. The support these high school students show one another enables their friends and acquaintances to take chances and try new things.

In the process, they produce beautiful pieces of performance art. In addition, they engage in the crucial and wondrous work of creating and re-creating themselves as multi talented individuals who model courage for the rest of us.