Congratulations to Keystone debaters on their success in the recent Saint Mary’s Hall Debate Tournament. 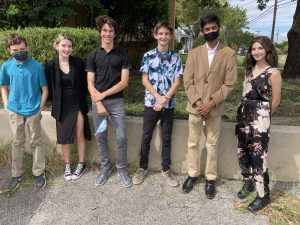 Out of twenty schools, the team of seniors Jack and Liv went undefeated and took first place in the entire tournament, held virtually. Moreover, both students received a perfect score in speaker points in several rounds. Jack came in as 2nd speaker overall, and Liv came in as 3rd speaker overall. “In addition to their brilliant and articulate performance, they were both unyieldingly kind and polite to their opponents and judges,” notes sponsor Dr. Armentrout. What’s more, this was Liv’s first debate tournament ever.

The team of 9th graders Lucas and Aarav also proved formidable in their first tournament ever. They too defeated more senior opponents with their clear speaking and sophisticated argumentation, completing prelims with a 2-2 record.