Congratulations to Derek, named as a Presidential Scholar. 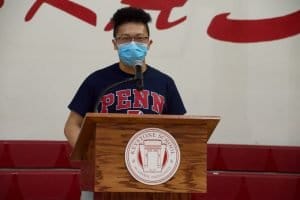 “The 2021 Presidential Scholars represent extraordinary achievements for our extraordinary times,” Cardona said in a statement. “I am delighted to join President Biden in saluting these outstanding young people for their achievements, service, character and continued pursuit of excellence. Their examples make me proud and hopeful about the future. Honoring them can remind us all of the great potential in each new generation and renew our commitment to helping them achieve their dreams.”

Each U.S. Presidential Scholar has been offered the opportunity to name his or her most influential teacher. Each distinguished teacher is honored with a personal letter from the Secretary of Education. Derek chose Suzanne Elizondo, now retired.

A multicultural young man, Derek is fluent in English, Spanish and Mandarin. Among his many activities, he served as an intern for state Sen. José Ménendez, managing director of the Texas branch of a Canada-based nonprofit called The Global Spotlight, organized music therapy for VITAS Hospice, and served as co-editor of the Keystone Keynote student publication.

The White House Commission on Presidential Scholars selects scholars annually based on their academic success, artistic and technical excellence, essays, school evaluations and transcripts, as well as evidence of community service, leadership and demonstrated commitment to high ideals.

The 2021 U.S. Presidential Scholars are comprised of one young man and one young woman from each state, the District of Columbia and Puerto Rico, and U.S. families living abroad, as well as 15 chosen at-large, 20 Scholars in the arts and 20 Scholars in career and technical education.

He’s the third Keystone student to receive the honor. The others were Phyllis Adler in 1966 and Timothy Sammons in 1969.