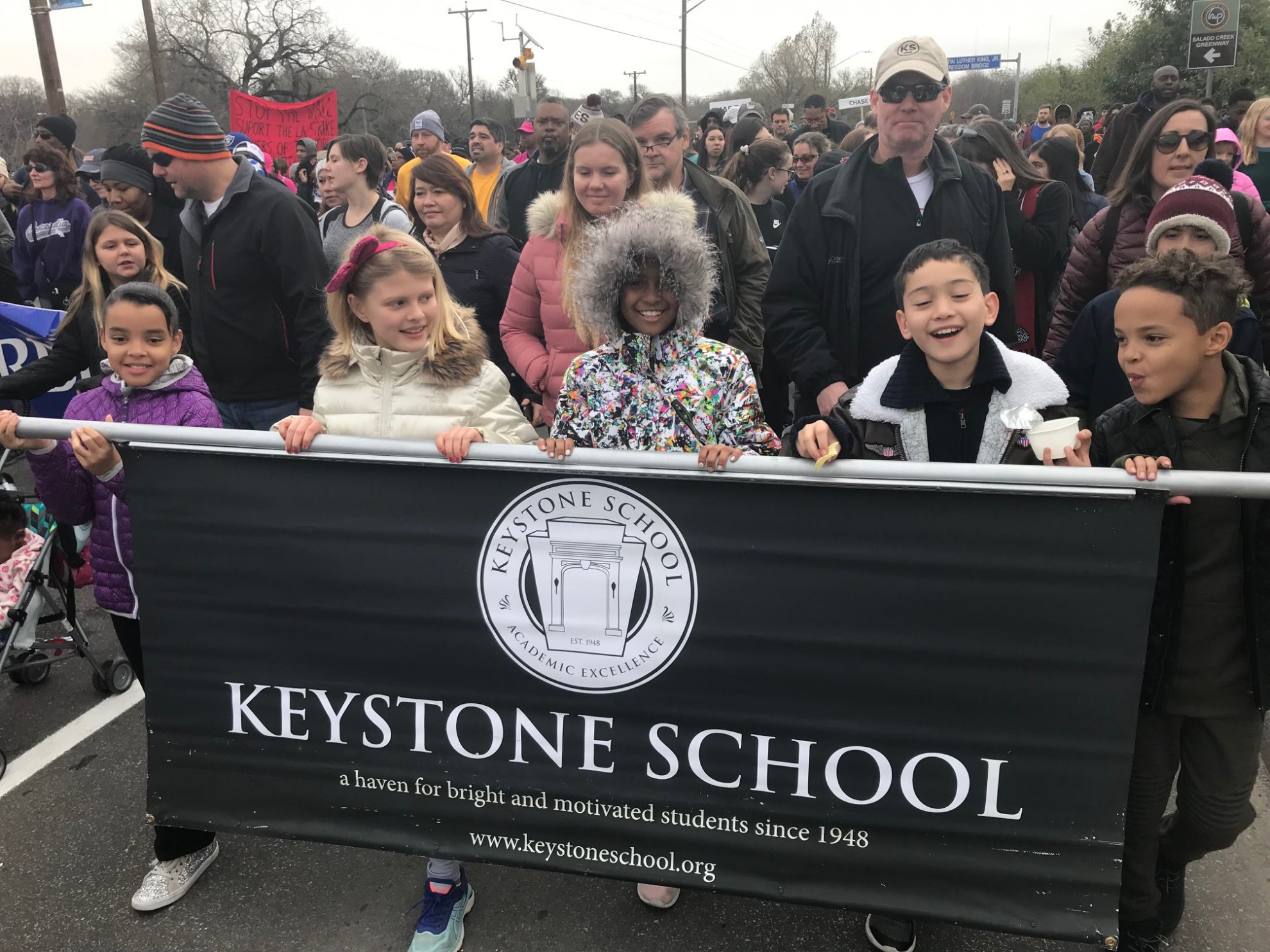 “We are all caught in an inescapable network of mutuality, tied in a single garment of destiny. Whatever affects one directly affects all indirectly.”
–Dr. Martin Luther King, Jr.

One of my favorite holidays is the annual commemoration of Martin Luther King, Jr’s birthday, and I have come to appreciate it even more in San Antonio. For the second year in a row, I had the privilege of walking with other members of the Keystone community in the MLK march, which is now the largest of its kind in the nation. There’s something awe-inspiring in seeing the hundreds of thousands — yes hundreds of thousands– people walking in support of peace and justice. It provides one with a sense of hope and energy in these contentious times.

Every January, I try to read or listen to something related to Dr. King and the Civil Rights movement. It could be re-reading the seminal “Letter from Birmingham Jail,” finding a recent article, or listening to a history podcast. A couple of years ago, I heard a speaker explain that as educators, we should relish the opportunity to teach our students about the ongoing struggle in American history to realize the promise of the Declaration of Independence and the Constitution. Watching our Cobras walking with others in the MLK march humbled me, and I considered myself fortunate to to be in their company.

As we walked, I also considered how Dr. King’s work meshed with Keystone’s core values of academic excellence, ethical growth, community involvement, and responsible leadership. King entered Morehouse College as a 15 year old, then attended graduate school at Crozer Theological Seminary where he received a Masters’ Degree, and ultimately received a PhD from Boston University. As King developed his own personal philosophy, he immersed himself in the Old and New Testament, the American Transcendentalists, including Henry David Thoreau, theologians such as Paul Tillich, and 20th Century anti-colonial leaders like Mahatma Gandhi. As an 18 year-senior at Morehouse College, he said, “We must remember that intelligence is not enough. Intelligence plus character-that is the goal of true education.” In 1951, when King graduated from Crozer with valedictorian honors, Dean Charles Batten praised him as “one of our most outstanding students,” who showed “fine preparation, an excellent mind, and a thorough grasp of the material.”

At times in his career, Dr. King overcame an internal resistance to speak out when his personal ethics compelled him to proceed in spite of the cost. For many years, he refused to comment publicly on the war in Vietnam out of fear of alienating the Johnson administration or potential supporters. Although King began voicing anti-war sentiments in 1965, it was only after seeing pictures of bombing victims while on vacation in 1967 that King felt he could no longer remain silent. On April 4, 1967, he gave a speech at Riverside Church that explicitly called for the US to change its policy toward Southeast Asia. People responded to his speech with either strong support or bitter criticism; however King believed it was his ethical duty to bring attention to a conflict that he felt was morally wrong.

Although Reverend King’s work took place within communities, the nature of his efforts differed depending on the issues. In August, 1966, King commenced his first major protest in a northern city when he led a protest for fair housing and integration in Chicago. While some might predict that marching north of the Mason-Dixon Line would be easier or more welcome than in the South, King’s foray into the Windy City proved otherwise. As soon as he exited his car, King was struck in the head by a rock and required the protection of his aides from hurled bricks and bottles. King remarked “I have never seen, even in Mississippi, mobs as hateful as I’ve seen here in Chicago.” While the movement was designed to address particularities of Chicago’s housing patterns, the results were generally mixed; there was greater attention now paid to inequities but residential segregation in the community remained.

As we know, responsible leadership can manifest itself in a myriad of ways. Perhaps one example from King’s life was his trips to Memphis in March and April, 1968 to support the sanitation workers in their struggle for better working conditions. After two workers were crushed in a sanitation truck, laborers went out on strike. When a protest led by King and others on March 28th turned violent, King called off the march. Although King considered not returning to Memphis, in the end, he felt the need to return and lead a non-violent march to prove that this form of civic action could work. Sadly, we are all too aware of what followed.

Whether it was achieving excellence in his academic career, speaking out on the ethics of war, responding to a community’s housing patterns, or putting himself in harm’s way to demonstrate the power of nonviolent protest, the Reverend Dr. Martin Luther King, Jr.’s life can teach us to live out Keystone’s core values in our own lives. The spirit of his movement was with us as we walked on Monday; we can be proud of our students and their efforts to realize his work in today’s world.