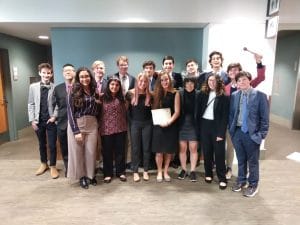 Ingrid, a senior, took Outstanding Delegate honors in the U.S. House of Representatives in 1965 where she simulated Leslie C. Arends, a long-time representative from Illinois. (Historical note: He’s perhaps best known for his stance that he would not support articles of impeachment against Richard Nixon in 1974).

Adam, a junior received the Best Delegate gavel in the UN Security Council, where among other feats, he ran circles around a U.S. delegate and managed to reinstate the Joint Comprehensive Plan of Action, more commonly known as the Iran Nuclear Deal.