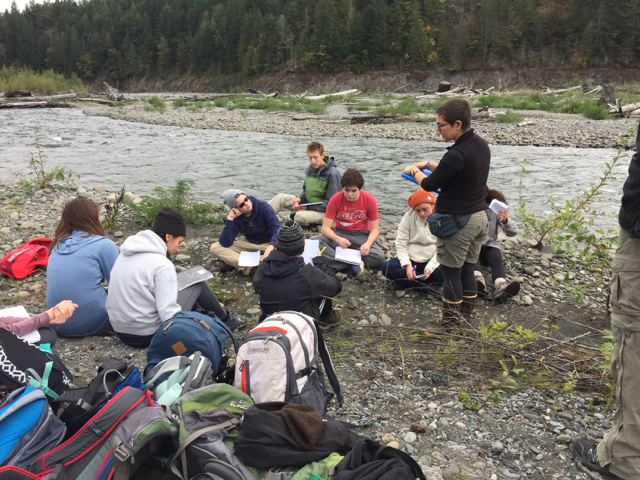 This might sound like a scene from a movie, but I promise you, it really happened. Fifteen Keystone 9th graders, an educator from the Nature Bridge program in Washington’s Olympic National Park, another Keystone chaperone, and I were perched on a boulder looking down on the roaring rapids of the Elwah River.  Our educator had asked us to close our eyes and imagine all of the people who had been in this beautiful place before us, and right as we were about to do so, a bald eagle slowly soared above us before heading on its way. We all sat in reverence and silence as the magnificent symbol of our country glided over us.  It was one of those moments when you feel lucky to be alive and in the company of others who you both like and respect. 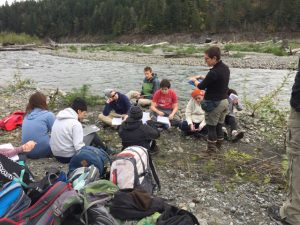 This reverential moment was one of many emotional events I was fortunate to experience during last week’s freshmen Outdoor Education trip. This annual excursion offers Keystone students and teachers a chance to study the Elwah and Solduc River watersheds, observe the beauty of this national forest, and bond as a class.  Mr. Spedding, Keystone’s Upper School Head, called me during the summer and invited me to come along as a way to become more acquainted with the newest high school students; I eagerly accepted his invitation. I had high expectations going into last week’s trip, and I was not disappointed.

Whether we were hiking in what had been a lake until the Elwah River dams were demolished in a successful attempt to restore the river, canoeing across Lake Crescent, climbing to see a waterfall, or doing a night hike through the forest, the students were game to try new things and deeply appreciative of the beauty of the Pacific Northwest.  In addition to the reverence they felt about the world around them, they expressed a variety of other emotions.

Perhaps one of the most touching to witness was their awe.  Every night, they asked us chaperones to take them down to the dock so we could lie on our backs and stare at the stars.  They would point out constellations, compare the night sky of their native Texas to that of Washington, and sometimes just sit in silence and soak it all in. It was during one of these quiet times that several students suddenly squealed with glee and amazement as they observed a shooting star. For some, it was the first time they had watched a star make its way across the sky, and their excitement was still palpable the next morning when they described it for others.  For me, it was pure joy to see their enthusiasm, and I counted my lucky stars to be with them.

On our final night at Nature Bridge, we had a campfire down by the lake, and as one would expect, we sang songs, told silly stories, and reminisced about the previous five days.  While all of this was heartwarming, it was fairly standard for a closing activity.

The unusual part occured next.  Our educators passed out sprigs of cedar and asked anyone who wished to share something for which they were appreciative to come in front of the group, speak, and drop the cedar in the fire.  I followed Mr. Spedding and thanked him for inviting me on the trip, Mr. Jim Lindsey, former Keystone Director of Finance and Interim Head for helping develop the school’s Outdoor Ed program, and the 9th graders for being so kind and welcoming to me as I endeavored to get to know them.

After I spoke, student after student came up to the fire and expressed gratitude to the school, their teachers, and their friends. They pointed out how much they appreciated the welcoming nature of the Keystone community and how grateful they were to the classmates for their support and care.  Their awareness was sincere and heartfelt, and it was beautiful to behold.

What I found as impressive as their gratitude was their courage.  Students discussed how alone they may have felt at other schools and how welcoming their fellow Cobras were. They shared their initial trepidation in coming to Keystone as a new 9th grader and how kind everyone was in making them feel right at home. Perhaps most touching was the student who had left Keystone for a couple of years to attend another independent school in San Antonio only to return this year. With a wisdom far beyond her years, she said, “sometimes the grass isn’t always greener somewhere else.”  I told her afterward that I was moved by her bravery in acknowledging the lesson she had learned.

Reverence, awe, gratitude, and courage-four emotions that many grownups may not associate with today’s teens.  All too often, we hear that adolescents are addicted to their phones, they are self-centered, and they demonstrate little appreciation for what they have.  Yes, they may spend too much time looking down at a small screen, OK, their world views can be circumscribed, and sure, they sometimes forget to appreciate the wonders around them. (As if all of these same things cannot also be said about adults.) However, after this last week, I would sing a different tune. While I cannot pretend to speak for all adults about every teenager, I can tell you that if the thirty-seven young women and men I spent time with are any indication of today’s youth, we are in good hands indeed.  As we landed at the San Antonio airport at 2:15 in the morning, I felt grateful for the previous seven days and optimistic for what lies ahead.