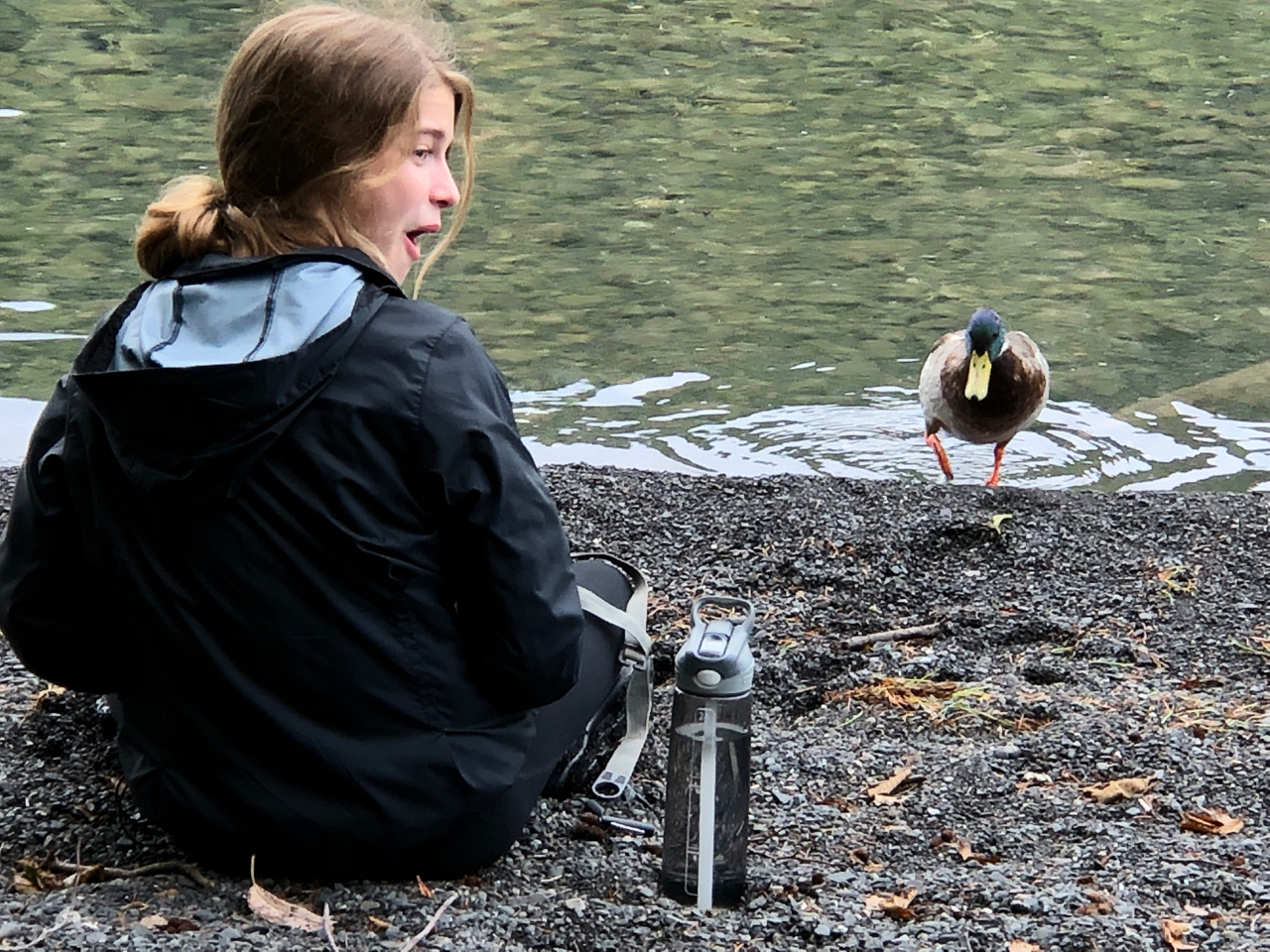 “They tell me you are a man of true grit.” (from the movie)

At my age and having travelled a fair amount, I thought I had seen a great deal.  Nevertheless, nothing prepared me for the beauty and magic of watching salmon leap out of the water and up a waterfall during last week’s 9th grade Outdoor Education trip to Olympic National Park. Like others, I had heard about this phenomenon, but as with so much else in life, seeing it in person defied any preconceived notions. The students and teachers observed with awe as the salmon threw themselves again and again against the rocks and the crashing water until they succeeded in moving upstream.  To the delight of the educators, our students literally cheered on the salmon and applauded when the fish made it to the next level.

Of course, the fish are playing out their life cycle honed over thousands of years, but for those of us watching from the river banks, it’s a timeless lesson in grit.

Grit, for several years now, has been all the rage.  Whether it was University of Pennsylvania Professor Angela Duckworth’s 2013 TEDTalk called “Grit: The Power of Passion and Perseverance,” or Stanford University Professor Carol Dweck’s 2006 book “Mindset: The New Psychology of Success,’ or journalist Paul Tough’s 2012 book “How Children Succeed: Grit, Curiosity, and The Power of Character,” sometime in the early 2000’s, grit, drive, or perseverance became the topic of researchers and educators.  (By the way, I strongly recommend both books and the lecture.) More and more, people pointed to the role that determination played in children’s personal development; furthermore, they argued, children’s will to succeed played a greater role than raw talent in determining their fate.  Even Albus Dumbledore got in on the action when he counselled Harry Potter that “it’s our choices, Harry, that show what we truly are, far more than our abilities.”

However, with all the discussion around grit, there were some elements that were absent.  For example, while many expressed the need to teach children how to be grittier, they didn’t always provide a solid road map for doing so.  Unfortunately, like all too many trends in education, there were bromides and mass-produced curricula; beyond the extraordinary, though, there were few helpful tips or programs that seemed to truly succeed.  Pointing out the need to help children learn resilience and “stick-to-it-ness” helped, but it was only the first step. As we quickly learned, teaching children determination required processes with many steps along the way.  Students need a variety of lessons and a plethora of examples. Like so much in the way we educate children, it demands repetition and contextualization.

Beyond watching the salmon, our ninth-graders experienced some spontaneous lessons in handling adversity and strengthening oneself.  On the second day of our six-day trip, we experienced a typical Pacific Northwest deluge. Unfortunately, this day contained a five-mile hike through the towering firs and gargantuan ferns of the rainforest; while the multiple shades of green stunned all of us, slogging through deep mud in soaked shoes presented a new set of challenges for these adolescents from South Texas.  Our educators expressed empathy, but they also reminded the children that if it was dry they wanted, they had “come to the wrong part of the country.”

Our Cobras could have complained the entire hike, but they didn’t. They could have whined, but they didn’t. And they could have just sat down and refused to go any further, but they trudged on.  We didn’t proclaim beforehand that this was a lesson in resilience; we didn’t need to as it quickly became apparent that this walk in the woods would test our students in a new way. And I’m proud to say that they responded beautifully.  Although they were fatigued, sodden, and worn out by the end, they learned that they could handle a strenuous walk in the rain.

Also missing from the discussions around teaching grit has been the absence of morality as an integral component.  One could argue that determination, in of itself, is value free. Over the course of history, we have seen many examples of people leveraging their drive to commit evil acts. To disconnect grit from ethics is to exemplify what is attributed to Aristotle that “educating the mind without educating the heart is no education at all.” Keystone’s core value of ethical growth compels us to guide children on ways to use their passion and drive toward benefiting themselves and others.   In addition, Keystone’s devotion to an inclusive atmosphere means that we teach students how to push themselves and encourage their peers, just as they cheered on those salmon spawning.

Throughout this trip,  the Keystone students showed something they had been taught in school and at home-each of us succeeds individually when we all prosper together.  As Benjamin Franklin said, “Either we all hang together or we all hang separately.” For our Cobras, a rising tide of support floats every student’s boat.  In the right environment, grit can be contagious.

On the final evening of our time together at the closing campfire, Keystone Upper School Head Mr. Spedding spoke to the students about these important lessons.  He explained how proud he was of them for their response to the pouring rain; in addition, he alluded to the way they exhorted the salmon as indicative of their class’s support for one another.  He encouraged them to remember the lessons we had learned that week and to be there for each other in the years ahead when the work will be challenging and the stress will be high. If our Cobras can do this, they will indeed be people of true grit.