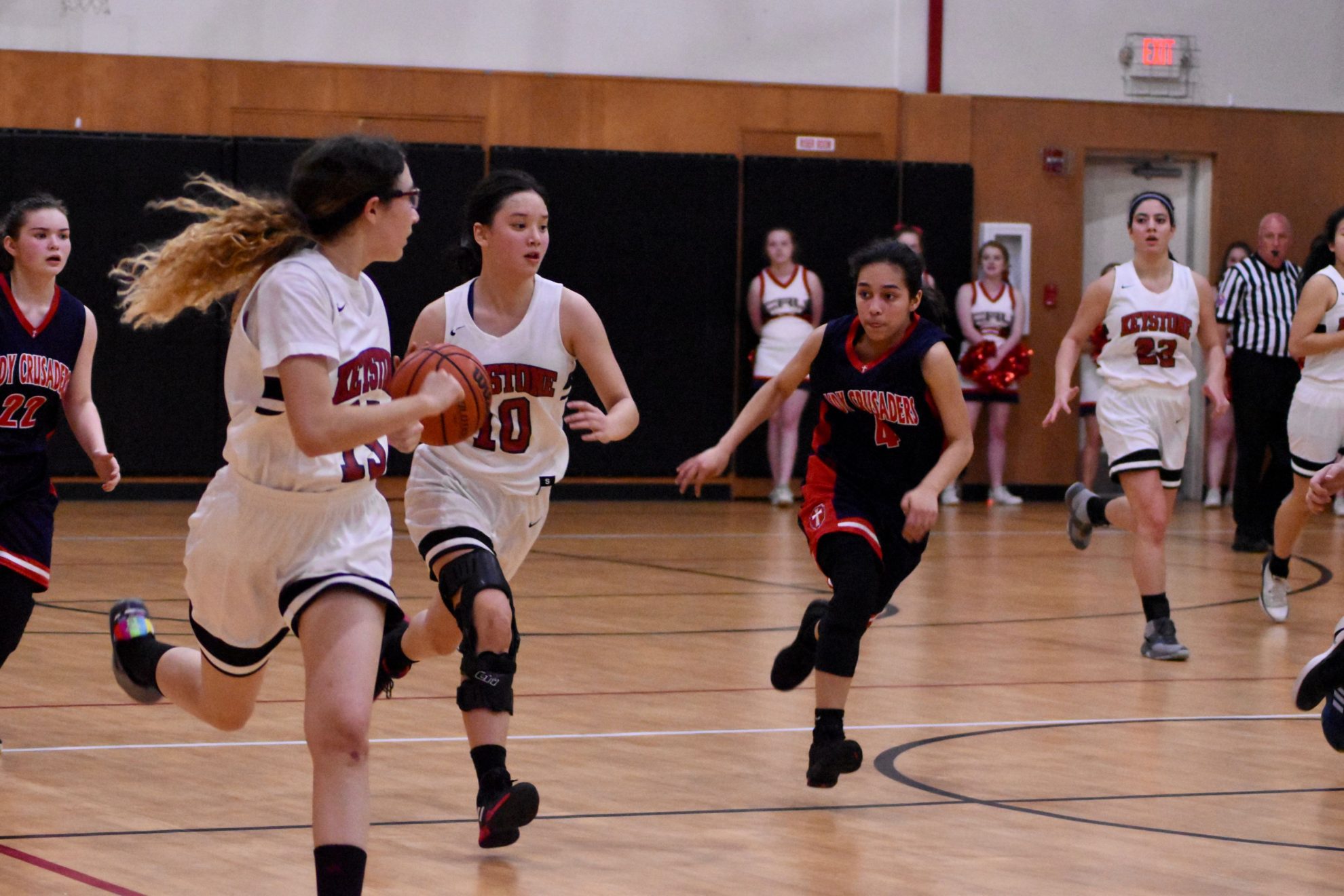 “Sports build good habits, confidence, and discipline. They make players into community leaders and teach them how to strive for a goal, handle mistakes, and cherish growth opportunities.”
— Julie Foudy

There are few things more enjoyable on a Friday night than watching a high school sporting event, which is not to say that other student activities are not also fun. When you pack a gym with raucous, albeit appropriate, student and adult fans, and the game comes down to the wire, the drama can feel incomparable.

Even though Keystone is celebrated for developing outstanding minds, we also help students hone their athletic skills, and they were in their best form a couple of weeks ago when the Keystone girls basketball team won in a state playoff game at our gym. It was wonderful to witness the exuberant student fans rushing the court as the final buzzer sounded. To our players, coaches, and fans, I say thank you. And to all of our student athletes, parents, and fans, thank you for providing us with so many thrilling moments and representing your school so well.

Among the many pleasures of working in schools is watching students compete in interscholastic athletics. Of course, one can find examples of poor behavior and appalling sportsmanship; and we’ve probably all seen the videos of parents attacking coaches or referees. In addition, we may have cringed at the adults who are yelling at children or screaming at officials. As a head of school for many years, I have had the unpleasant experience of being ordered by referees to escort parents out of the gym or tell a coach or player that they cannot compete in the upcoming contest because their outbursts embarrassed the school.

Nevertheless, there are countless anecdotes and many studies that support the benefits of playing sports in high school. (I would argue that many of these benefits also accrue to team managers, playing sports outside of school, or participating in musical or theater troupes.) According to the National Athletics Trainers Association, there are academic and lifetime advantages to participating in athletics. For example, students who play on a sports team typically earn higher grades and are more likely to attend college than those who don’t. Perhaps it’s the knowledge that they must use their time effectively; maybe it’s the same determination that allows a student to do well in academics can also be there in athletics. For whatever reason, students who play some kind of sport perform at a higher level across the board than those who abstain from participation.

The lifetime benefits of playing a sport are many. According to the trainers’ association website, scholar-athletes demonstrate more self-confidence, leadership, and self-respect, they set goals, they have a greater appreciation for diversity, and they embody a sense of morality. In addition, “Student athletes manifest stronger peer relationships, better attachment with adults, higher self-esteem, a closer sense of family, and participate more in volunteerism.” The self-esteem that comes from hard work and achieving results in partnership with others can manifest itself in students’ relationships with those not on the team.

It can also engender productive and long-lasting relationships with adult mentors. A Keystone parent recently told me that when her older child, who is a former Cobra, returns to school, the first place he goes is the gym so he can reconnect with his former coaches. While he had good relationships with his teachers, it’s the coaches he wishes to see right away since some of his foremost high school memories stemmed from competing for Keystone.

In addition, when students learn to play a sport, whether at school or someplace else, they come to understand that physical activity can reduce stress. This is one of the reasons that the ninth grade wellness curriculum at Keystone teaches a variety of physical activities like yoga, swing dancing, and ultimate frisbee. This understanding can serve them well the rest of their lives.

The self-discipline that playing a sport requires can transfer to other areas. In Kareem Abdul-Jabbar’s moving 2017 book “Coach Wooden and Me”, he describes the life lessons he learned from the longtime UCLA coach. Abdul-Jabbar said that part of the reason he ended up at UCLA was that when Coach Wooden met with his mother, he asked questions about his academic career and nothing about basketball. It meant a great deal to Abdul-Jabbar that Wooden wanted to know him as a young man and a student rather than merely as a ball player. Abdul-Jabbar also discussed how much time Wooden spent on teaching students the proper way to lace up their shoes: Wooden explained that from a pragmatic standpoint if a player didn’t tie his shoes correctly, his socks loosened, he developed blisters, and he couldn’t play. On a deeper level, Wooden wanted his student athletes to understand that excellence in anything begins by learning the basics, and without the fundamentals in basketball or math or a new language, a player or student cannot realize her potential.

Playing sports also provides paybacks, literally. Here again, according to the trainers’ association website, “People who played competitive sports in their youth tend to earn significantly higher incomes than those who did not. 82 PERCENT of female executives played organized sports after elementary school and 60 PERCENT of these women execs agreed with the statement that sports participation gave them “a competitive edge in the business world.” So, while the dollar value of playing sports may not be the primary rationale for doing so, it certainly helps to know that there are economic benefits.

As one might expect, there are physical health payoffs to playing sports. There is a lower risk of obesity, heart disease, stroke, and possibly cancer. In conjunction with our programming from Freedom from Chemical Dependency last week, playing sports can reduce a teen’s drug use and cigarette smoking.

Finally, and perhaps most obviously, as with any team activity, there is a collegiality and closeness among peers that results from playing sports. The sense of mutual dependence that comes from participating in a group activity binds students to one another and helps them learn that as John Dunne said, “no man is an island entire of itself.”

So, with all of the bad news that can sometimes taint our picture of sports, let’s remember all the life-long benefits and support our students in their extra-curricular activities, whether it’s on the court, the field, the theater, or the music pit. Go Cobras!