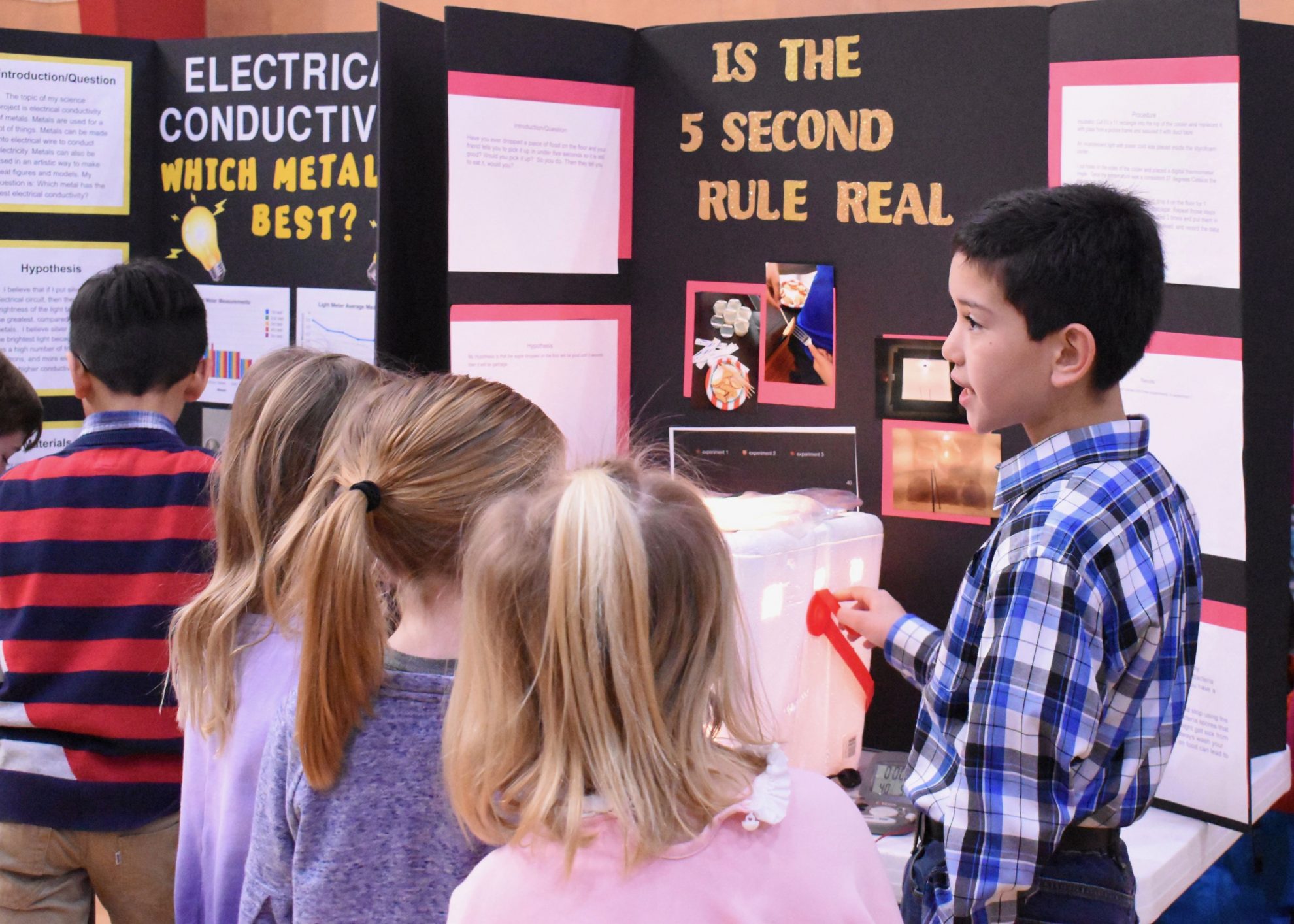 Research is formalized curiosity. It is poking and prying with a purpose.
—Zora Neale Hurston

“Clear eyes, full heart, can’t lose!”  If you’re a TV watcher or a football fan, you may recognize that adage from the hit series “Friday Night Lights”.  As my wife attests, binge watching that show was my form of relaxation for a year. I would come home after a long day, put on headphones, and immerse myself in the world of small-town Texas high school football.  Although she never quite understood why I wound down by watching a show about the problems in a school, she bought me a t-shirt with the motto on it.

So, when a colleague explained to me that science fair is to Keystone what football is to the real-life Permian Tigers of Odessa, the town on which “Friday Night Lights” is based, I had to learn more.  I have been in other schools where science fair is a big deal, so I thought I knew what to expect. Nevertheless, over the past few weeks I have been immeasurably impressed observing students pursue a topic that they have wanted to study, formulate a hypothesis, perform experiments, collect data, and report results.  The enthusiasm expressed by students as they discussed their findings was both humbling and uplifting.

I interviewed several students ranging in age from third grade to junior in high school.  As you can imagine, the sophistication and complexity of the students’ research increased as I moved up the ladder. However, the joy in learning and sharing their newfound knowledge were universal from third grade on.  Here are a few examples:

Third grader Carson’s fascination with magnets and his experience as a Pinewood Derby racer led him to study cars with magnets and measure their speed and balance.  The continual flipping over of the cars led him, like an engineer at an automobile company, to repeat his experiments. He said that science fair taught him that making mistakes is an important part of learning, and that “you have to just do it again and again.”

Also in third grade, Caroline’s interest in renewable sources of energy compelled her to study what type of light is best for solar cells.  By making a snap circuit with a solar panel, connecting it to a switch, with a voltmeter, and putting it under different types of light, she made a graph. She learned that direct sunlight is the most effective source of light, and clouds don’t weaken it as much as she thought it would.   She said that science fair was fun and she was able to learn more about a topic in which she has a great deal of passion-clean energy.

Did you ever wait tables, and if so, were you told that as long as a piece of food sat on the floor for no longer than five seconds, it was still OK to serve?  Fourth grader Andrés set out to understand if the “five second rule” was in fact true. His first experiment in three groups entailed putting an apple slice on the floor; he found  1.34 cubic centimeters of bacteria in 1 second, in 2 seconds 22.34 cc, 3 seconds had 12 cc., four seconds had 9.45 cc, and five seconds 15.51 cc of bacteria.  His conclusion was that the apple slice would probably be ok to eat in five seconds, but it’s probably better “just to throw it away.” He explained that the experiment was fun until he had to smell the apple with the bacteria; his advice- if you’re sensitive to smell, don’t do it.  Wise words from a fourth grader. I wish he could have shared his information with my restaurant managers when I waited tables in college.

Speaking of wisdom, fellow fourth grader Neerja demonstrated a great deal as she studied the effects of expressing gratitude on a person’s happiness.  A survey of 40 to 50 students in fourth and fifth grade asked them to list three things for which they were grateful. Neerja then placed the answers on a happiness scale and investigated the median score while comparing boys and girls. She also researched other happiness studies that focused on the emotional and interpersonal benefits of gratitude and the physiological impact on people’s brains. She reaffirmed her hypothesis that gratitude does in fact make us happier; she also explained that “you’re never too young to discover something,” and “there’s always something to discover in our world.”

A healthy daily habit led seventh graders Joanne and Abi to ask if probiotics actually help our immune systems as they are advertised, and if so, what strands work most effectively.  They studied the immune systems of c.elegans, which are microscopic nematodes that live in soil. They proved their hypothesis that bacillus subtilis was most effective with bacillus thuringiensis after performing a procedure that required fifty to sixty distinct steps.  In my interview with the girls, that had us all laughing as they answered each question in perfect harmony with each other; they expressed their love for hands on science, their joy in working with a partner, and the excitement of getting to play with fire.

Junior Beryl lit up with enthusiasm as she described her research on traumatic brain injury by seeing what the medication GCSF would do for brain traumatized fruit flies.  She shared that her subject is a hot topic currently and she wanted to learn more after hearing a talk last summer in her Volcker internship at UTSA. In particular, Beryl wanted to see if GCSF would reduce loss of mobility and incapacitation while looking at a mortality index at twenty-four hours and the possibility of neurogeneration.

She found in her study that her device would work in all areas and with the mortality index versus controls. When asked why she continues to do science fair when it’s not required, Beryl grinned and explained that it’s partially “an ego thing” that she’s been doing since sixth grade, she loves the sense of independence that comes from pursuing her own research, the fact that science fair teaches time management, and she enjoys the presentations.  Her love for learning was infectious.

So, after doing my own research on science fair at Keystone, what have I learned?  Students explained that it’s joyful to ask a question, it’s energizing to follow a path of research wherever it may lead, that mistakes are an inevitable component of learning, and confidence and self-esteem stem in part from doing hard work and achieving results.  As I roamed a third grade classroom the other day and watched students typing up their science fair reports, the energy and pride felt inspiring and invigorating. In the spirit of Neerja’s study, I thank all of our students for your admirable work ethic, your devotion to excellence, and your enthusiasm for learning new things.  With their clear eyes and their full hearts, our Cobras can’t lose.