“A classic is something that everyone wants to have read and nobody wants to read.”
Mark Twain

“So many books, so little time” is the saying on one of my favorite T-shirts and describes how I feel about the reading life. With so much great literature and nonfiction out there, how do we decide what to read? Our lives are short but our reading lists are long, and this doesn’t include what we have to read for work or school. 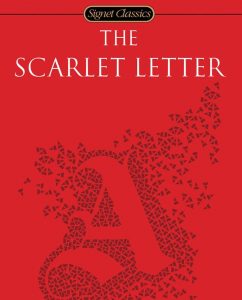 When Keystone’s ninth and eleventh grade English teacher told me that his students were reading Nathaniel Hawthorne’s “The Scarlet Letter,” my interest was piqued. Was this nineteenth century classic and perennial junior year selection still a good choice, I wondered. On the one hand, I could see students finding it dated; on the other hand, some might find the tale of adultery and ignominy all too relevant in an era of online shaming and the #MeToo movement.

To learn what the students thought about this particular novel and literary classics in general, I sat in on some classes and interviewed students over lunch one day. Dr. Lawrence asked students to lead the discussion around a variety of topics. Listening to them grapple with the applicability of the plot to today’s world intrigued me. Some students discussed the similarity of shaming in the Puritan era to today’s online cancel culture and wondered if the phenomena were really that different. Other students pointed to the inherent power inequity between Hester Prynne and the town minister Arthur Dimmesdale, with whom Hester had an affair and a child out of wedlock. Although “The Scarlet Letter” was written in 1850, it seemed to deal with headlines from the latest news.

Later that week, I joined some juniors for a pizza lunch to learn more. Anjali said that when they were assigned “The Scarlet Letter,” she was skeptical that a book written that long ago would be applicable, since we’re so different today. Like others, though, she acknowledged that the storylines around adultery, sin, and the treatment of women made the work pertinent to our times. Nicole chimed in that she also didn’t think it would tie to 2019, and to be honest, some parts of the novel did not relate at all but other elements did connect to today. Tim agreed that unfortunately, public debasement is always there, even if the way it manifests itself may differ from era to era. He also said, “ideas may change but people don’t” alluding to the continuity of the human dilemma through time. While Derek felt that the overt religiosity of the book precluded it being germane to today, Kaitlin said that history and its lessons for the present are always with us. As Ali and Anjali debated whether Hawthorne’s themes still held resonance in 2019, I reminded them of the old adage attributed to Mark Twain, “history doesn’t repeat itself, but it rhymes.”

At this point, we moved into a wide-ranging discussion on the definition of a classic, the debate over whether there’s a canon of American literature, and how we choose what to teach. To no surprise, the students said that for a work to be considered a classic, it must last beyond the period in which it is written and deal with universal human themes. Derek wisely pointed out that sometimes the popularity of a work depends on timing, finding the right publisher, and simply luck; however, these works may not stand the test of time. Tim astutely explained that a classic must be “visceral, complex, and transcend time, race, or class.” Ali was more willing to allow for a fluid definition-”if you want to read it again and again, that makes it great;” Kaitlin differed, saying that a classic must be multivalent and allow the reader to see the world anew and differently. Anjali opined on the teaching of literature,““education through literature is analysis, It’s not the text itself, it’s the skills that you learn through reading the books. It’s not what you are reading, but how you are reading.”

As you may surmise, I found this conversation with the juniors enjoyable and energizing, and it reminded me of the debate over the canon that raged on college campuses in the 1980’s. As students and professors spoke and wrote on how broadly or narrowly to define the corpus of American Literature, one article from back then struck a nerve and has stayed with me. This author explained that our fight over what every American should read in high school and college contained an unspoken but deeply disturbing premise-that after students finish their formal education, they will rarely read for pleasure. Unfortunately, this assumption is supported by recent research on students while they’re still in school. According to an American Psychological Association article from August 2018 called “Teens Spend More Time Time on Digital Media, Less Time on Reading,” fewer than twenty percent of teens report reading a book, magazine, or newspaper daily for pleasure and one third have not read a book for pleasure in a year.

Perhaps we need to alter our approach. Instead of arguing over what people should read, we can focus some of our attention on how to instill the habit of life-long reading, As opposed to choosing one book over another, our children will opt to read both. While we can continue to debate what makes some literature great, we could concentrate our efforts on teaching young women and men the greatness of reading. If we do this, they will learn as Emily Dickinson said, “There is no frigate like a book to take us lands away.”