“In the midst of war or crisis, nothing is as clear or as certain as it is seen in hindsight.”
–Barbara Tuchman

“So, tell me again why we have to learn this?” When students pose this question, we educators need to stop, take a deep breath, and help students see the relevance of the formula we’re explaining, the verb we’re conjugating, or the historical event we’re describing. Embedded in this query lies the opportunity to help young minds discover the connection between whatever we’re studying in class and the greater world. 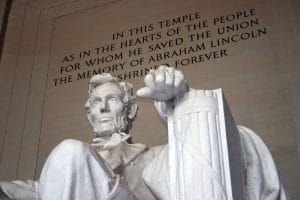 As a historian, history teacher, former college professor, and school administrator, I welcome this interrogation. It forces me to connect the dots in my own head so I can draw the line between them for students. In our analysis of history, and the many versions of it, we have the responsibility and the good fortune to teach children as the author William Faulkner said, “The past is never dead. It’s not even past.”

When our older son, who is now 23, was born, I performed a thought experiment. As I pondered our son’s place in history, I realized that there was more time between when he was born and the end of the Vietnam War than there was between when I was born and the end of WWII. That floored me; the second world war, which conjured images of black and white John Wayne movies, felt like eons before my birthday. I then went back a little further and recognized that there was more time between the birth of my son and that of my father than there was between my dad’s birthdate and the Civil War. Events that seemed in the distant past were actually not so far removed.

Similarly, when our younger son came in 1999, my wife’s grandmother rocked him to sleep some evenings. Here was a woman born in 1899 who had been a witness to the entire 20th Century cradling a child who would know only the 21st Century. She’d lost a brother in World War I, a relative in the Great Pandemic, lived through the Great Depression, and sent a son to fight in World War II. When my wife and I gave the eulogy at her grandmother’s funeral a few years later, we discussed her life as a microcosm of the century and described how grand events we had studied in history classes affected her personally.

Perhaps one way to excite children about the study of history is to focus on the role of contingency. All too often when children learn about past events or historical personalities, they assume an inevitability. They see a linearity to the course of history and fail to realize that events could have gone in a multiplicity of directions. As a result, they fail to comprehend that just like today, nothing was a foregone conclusion.

Abraham Lincoln could have acceded to his wife’s wishes and skipped the theater on April 14. Nikita Kruschev might have ignored President John F. Kennedy’s blockade of Cuba in October 1962 during the Cuban missile crisis. These are the types of choices people face that we should wrestle with in history classes.

A 2007 American Historical Association (AMA) statement called “What Does It Mean to Think Historically” makes a strong argument for what historians call “contingency.” The AMA piece offers a powerful corrective to “the fallacy that events pursue a straight-arrow course to a pre-determined outcome, since people in the past had no way of anticipating our present world. Contingency also reminds us that individuals shape the course of human events… To assert that the past is contingent is to impress upon students the notion that the future is up for grabs, and that they bear some responsibility for shaping the course of future history.”

Teaching students contingency shows them the role of the individual in history. Nobody forced Susan B. Anthony to speak out on women’s suffrage; Rosa Parks could have said “no” when called upon to protest the segregationist bus policies in Montgomery in 1955. Individuals made choices; as a result, they irrevocably changed society. When students learn how their predecessors chose to act, they can also see themselves as agents of change. Consequently, they are empowered to make a difference. What a great lesson for them to learn!